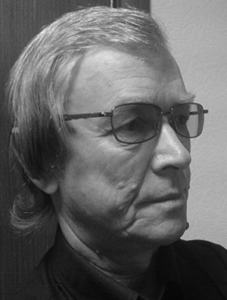 Member of the Russian Academy of Motion Picture Arts «NIKA»

Laureate of the State Prize of the Russian Federation in the field of art and literature in 2002.

Laureate of the Perm region in the field of culture and art.

Anatoly Baluev was born in 1946 in the village Kochevo of Komi-Perm Autonomous District, where he graduated from the same high school. In 1969 he entered and in 1973 graduated from the faculty of Film history at Union State Institute of Cinematography (VGIK).

From 1973 he worked as an editor at first, and then a director at Sverdlovsk film studio, where he shot most of his films.

From 1999 to 2006 he worked as a director and head of combining TV movies on STRC «Ural» (Yekaterinburg).

Laureate of the State Prize of the Russian Federation in the field of literature and art (for the film «Bykoboy»).

He was a member of the Academy of Motion Picture Arts «Nika».

Approximately half of their movies Anatoly Baluev fully or partially removed in their homeland — in the Permian Komi District.

The first one was a big one and half the picture «We Were Smoke» After that shot, «Waves», «Tupi-tap», «Bykkoboy», «Mam», «Mirage», «Silver Horse» and, finally, the last picture of the director’s «Stardust.»

Many of these films have been shown not only in the Komi District, but also broadcast national TV channels.

All paintings are on display at the Russian and international festivals, and many of them were marked with prestigious awards: the main prize of the Open Documentary Film Festival «Russian» to the Grand Prix «Gold FIPA» festival of audiovisual programs in Biarritz (France).

Needless to say, that each of these films look with interest today, because they are all imbued with poetic and the author as a philosophical attitude to his people and to life in general.

Prize «For a film made with love and humor» at the Film Festival in Pärnu (Estonia).

The Grand Prix in the category of professionals at the festival «Movisual» (Budapest), 1999.

The Grand Prix of the international festival «Gold FIPA» in Biarritz (France), 2002.

The Grand Prix of the open festival of documentary films «Russia» (Yekaterinburg), 2000

The prize for best documentary at the international festival of television programs and films «Teleprofy», (Saratov), 2001.

The prize in the category «Best National Program» at the V Festival television programs and films «Golden Drum 2001», (Khanty-Mansiysk)

For the same work the director was awarded the State Prize of the Russian Federation in the field of literature and art for 2002.

Grand Prix «Golden Chest» at a festival in Plovdiv (Bulgaria), 2003.

Special Jury Prize at the Film Festival in Trieste (Italy), 2004.

Participation in the main competition program of the festival IDFA in Amsterdam (Netherlands), 2004.

The award of the Perm region in the field of culture and art.

The Grand Prix of the Festival of Russian «TeleProfy» (Saratov, ) and the main prize in the category «Best Director» of the same festival, 2007.

Participation in the competition program of the International Festival in Amsterdam (IDFA, 2005).

The Grand Prix in the nomination «The director of the program or film» Russian festival «Teleprofy» (Saratov), 2010.

The film was presented in Russian program of the festival «Millenium» (Brussels) and in the national competition program of the International Film Festival «Message to Man» (St. Petersburg).