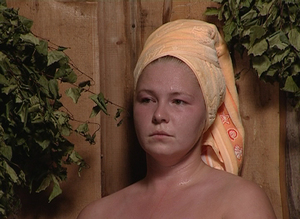 Written and directed by Anatoly Baluyev.

Through all the film long is running through a Komi-Permiak legend about Pera Bogatyr, son of the Earth, and Zaran the Beauty, daughter of the Sun.

The same way, there are two young heroes in this film. Maxim is a postman in the ancient Kupros town, and Irina is gynaecologist in Kudymkar city. They are of the same age, and you could think there’s nothing else common between them. But, in the second part of the film, unexpectedly, the spectators find Maxim and Irina in the same village.

The film presents a wide panorama of the today’s life of Komi-Permiak people.

Lovely details are alternating with obviously tragic things: no work and no future, mass hard drinking, no wish to give birth to children etc.

50 years ago,  the population of Komi-Permiak Okrug was 240 000 people, today it decreased almost twice and is now 125 000 people only. A small but very ancient Finno-Ugric nation is in danger of a complete disappearance.

Although, the film is not leaving a feeling of despair. Of course, the spectators are a little disappointed that Maxim and Irina’s lives do not cross,  but both they are young and attractive and it gives a reason to hope.

Although this hope is not very strong.